Even though some say that opposites attract, often two opposites can go remotely well. The same is noticed when Aquarius and Taurus come together. Even though these zodiac signs aren’t exactly placed on the opposite poles on the chart, they have several differences that make them appear as darkness and light. So why are Aquarius so attracted to Taurus after all?

The simple and raw confidence of Taurus, having a strong sense of presence wherever they appear, is totally magnetic to Aquarius. Earth signs are always domineering, proud, and standing firmly on the ground, which is very appealing to this flighty air sign. But still, even with all their ego and self-confidence, Taurus doesn’t belittle Aquarius, which makes the water-bearer extremely attracted to their maturity.

Main Differences Between Aquarius and Taurus

Talking about the romance between these two, we instantly think how on earth they can possibly be attracted to each other since Taurus is the sign with the more traditional and straight kind of approach towards life and relationships, while Aquarius is often seen as a visionary and idealist, paving its own path and straying from the common laws and norms. Sounds like a relationship between a philosopher and scientist.

Venus rules Taurus, the goddess of love and beauty. They carry feminine energy and are more nurturing and playful, making the relationship passionate and steamy. On the other hand, Aquarius is ruled by the masculine Uranus, a planet of chaos, upheavals, and constant change. Aquarians constantly move forward, bringing new ideas and opening new perspectives into the relationships.

Aquarius is attracted to those who are sure of themselves and have strong ethics; this is where Taurus comes exactly as it is. Taurus radiates a strong, grounded presence, while Aquarius can’t be sure about their thoughts and opinions. 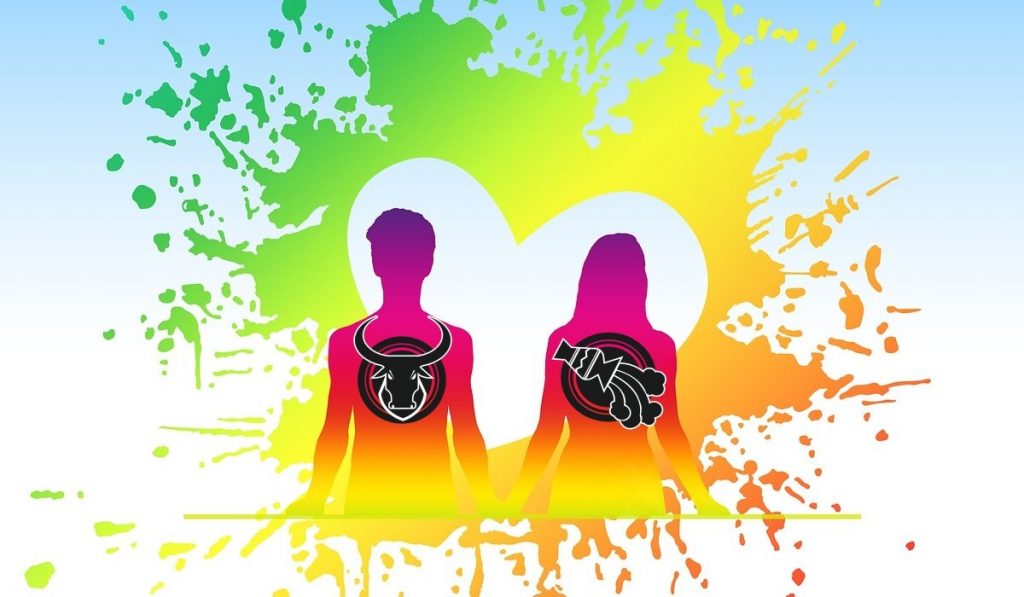 Why Is Aquarius So Attracted to Taurus Sexually

Sexually, Aquarius and Taurus are built differently. Taurus is the affectionate love maker that wants devotion and sensuality, while Aquarius is more into the new, offbeat experiences. Taurus is a romantic sign that wants to be adored and worshipped in relationships. They want seduction, touching, and kissing to carefully explore their partner’s body, as they commit to sex with all of their senses. All Taurus needs is slow music and dimmed lightning to start the show.

Aquarians are turned on by the taboo; although they may appear cool and nonplussed in bed, Aquarians are generally open-minded lovers. They hold their emotions and passion deep inside and try their best to contain their excitement, fearing that it will make them vulnerable and appear weak in front of their partner.

The special connection can spark fast as Taurus wants to get an instant taste of the Aquarius’s hidden side. Taurus is drawn to mysticism, and everything beyond the surface, while Aquarius likes to be uncovered little by little, which is something Taurus does the best.

Aquarius gets tired of routine, and everything that doesn’t thrill them can get insanely boring. They live for the adrenaline and change, and with Taurus being a real people-pleaser, they won’t be spared the bull’s whole attention to fulfilling all of their desires.

Why Is Aquarius Drawn to Taurus Emotionally

Both being fixed signs, Aquarius and Taurus have a basic understanding of each other’s point of view. They express emotions in similar ways, as they are both pretty stubborn and very much attached to their feelings, oftentimes finding it too hard to open up and speak freely.

While Aquarius is often considered and being too emotionally cold and distant, they are very logical signs. Aquarians tend to rationalize their feelings before allowing them to experience them. Taurus loves affection and constantly seeks reassurance from their partner. Taurus often finds Aquarius too detached, while Aquarius may feel that Taurus is too needy and clingy and may want to find a way to escape all of that emotional pressure.

Whether these two will be in a relationship, Aquarius will always focus on something greater and bigger since they think outside the box. In contrast, Taurus will be focused on the family and the stability of the home. The strong and stable disposition of the Taurus helps settle the uncertainty of the Aquarius partner. However, the riveting ideas and thoughts of the Aquarius will draw the bull and spin a web of mutual admiration between them both.

Once in a loving relationship, they will be extremely committed to each other. Trust will be related easier when the Taurus trusts the Aquarius partner and doesn’t want to control them. While the Aquarius partner starts opening up more and resists the urge to keep everything a secret.

The Relationship Between Aquarius and Taurus

This isn’t an easy match unless the Aquarius partner has some extra earth signs in the chart to compensate; on the other hand, the Taurus partner needs to possess some air, too, to create a perfect balance.

Taurus is the creator of comfort, with sensuous and deeply sexual orientation and thoroughly enjoying sex. After the initial passionate stage, the relationship can quickly cool off, as the Taurus partner can demand too much from the Aquarius partner. Taurus is prone to being possessive and won’t value Aquarius’s space. They will have their own projects, experiments, and goals outside of the relationship, which Taurus often won’t understand.

Passive resistance is the bull’s specialty, which can put pressure on the Aquarius partner when the Taurus doesn’t find another way to get his attention. At the end of the day, these qualities can appear kind of pleasing for the Aquarius partner, as they will always have someone holding their back whenever they return from their mind expeditions. 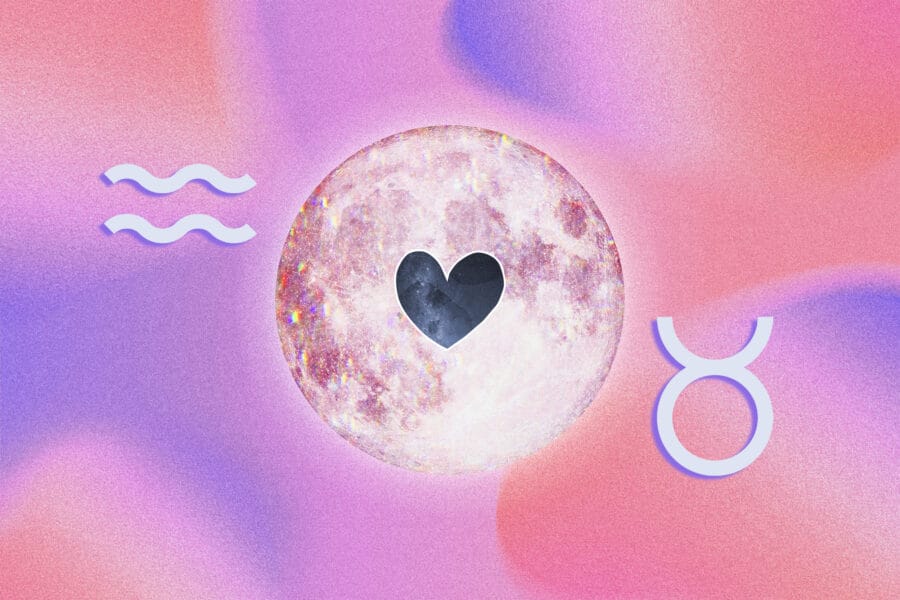 Why Are Aquarius and Taurus a Great Match

Together this weird pairing can create a relationship with good vibes and energy. Aquarius breathes life into Taurus, while Taurus helps Aquarius to find their place in the world. In nature, these two can get along very well as each sign has something new to learn from the other. Aquarius’ makes the flowers grow for Taurus, while Taurus nurtures them and welcomes them in their safe place.

These two are meant to be, but if they are against each other, difficulties and conflicts can make them part ways. While Taurus is naturally more conservative, Aquarius is more progressive, encouraging Taurus to keep up with the pace and slowly making it more comfortable to step out of its comfort zone. Once they accept their differences and start cooperating with each other, Aquarius and Taurus can be a great power couple.

Learning from each other

Taurus values tradition, while Aquarius turns down the status quo, opting for a more innovative future. Aquarius often lives in mind, while Taurus brings all those ideas into reality. Taurus can help Aquarius manage their daily activities and handle them quicker and more efficiently. While the water-bearer helps them discover the full potential of their subconscious mind.

Despite the challenges, these signs become so stuck on each other that often it feels like a guilty pleasure. They still have a strong potential for harmony because Taurus is good at managing money and everyday tasks, which is helpful for Aquarius, who often struggles with practical matters. Taurus can find Aquarius ideas like a breath of fresh air and make them expand beyond the common horizons.

Generally speaking, the earth and air sign don’t make a great match. Earth signs tend to go well with the water signs, coming from the common concept that earth and water belong together, while Aquarius being an air sign, makes a perfect match for the fire signs. Astrologers deny this belief and express that contrast elements and qualities of the zodiac signs can make them complement each other.

Once Aquarius and Taurus break up, it probably happened after they have done everything in their power but still didn’t work out at last. Without harsh feelings, both will want to move on. This can come as a result of Taurus being bitter and seeing the relationship as a personal failure. Taurus go all-in into the relationship, not only putting their emotions but time and money, which are highly valuable for this earth sign. Every doomed relationship deeply devastates Taurus.

The Aquarius partner, on the other hand, will tend to escape reality and will find the breakup hard to accept. They will want to move into the next relationship to avoid feeling brokenhearted, as Aquarians don’t deal well with their emotions.

Suppose they split up and still hold dear emotions to themselves. In that case, it is likely for them to start an on-off relationship that can slowly develop into a toxic cycle. Taurus is the one to pull Aquarius back in, and Aquarius runs away while Taurus backs up and gives all their hopes away by making Aquarius crave their attention back.

If both partners are fully developed representatives of their signs, they can find a mutual understanding and work their ways back into the relationship by committing to make an ultimate compromise.

Either way, if these two signs decide to finally split ways and call it quits on their relationship, it’s not much likely that they will ever forget about each other.